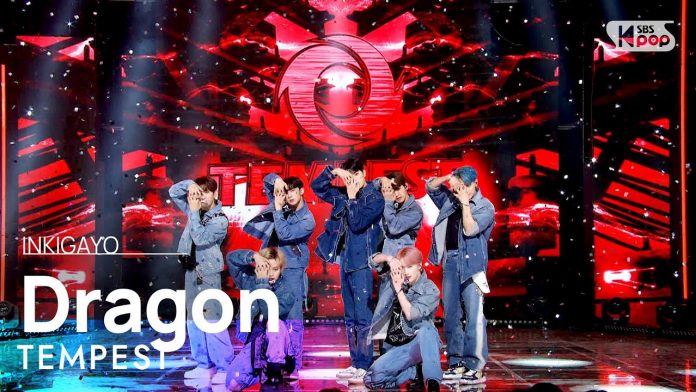 TEMPEST (Hanbin, Hyungseop, Hyuk, Eunchan, Lew, Hwarang, Taerae) appeared on SBS’ ‘Inkigayo’, which aired on the afternoon of the 27th, and performed the title song ‘Dragon’ of ‘ON and ON’.

Tempest announced their comeback by performing on stage with the spirit of a soaring dragon, equipped with rough masculine beauty.

Tempest drew attention with the point choreography “Yongyong Dance,” which expresses the appearance of a dragon taking flight with a yeouiju, and the choreography expressing the dragon’s sharp teeth with hand movements.

This album contains Tempest’s strong will to move non-stop to a new world created by ‘us’ together, and the aspiration to soar toward the dream without being complacent.

‘Dragon (飛上)’ is a song that compares the image of a dragon flying higher to ‘dream’, and members Lu and Hwarang participated in the lyrics, proving their musical growth.