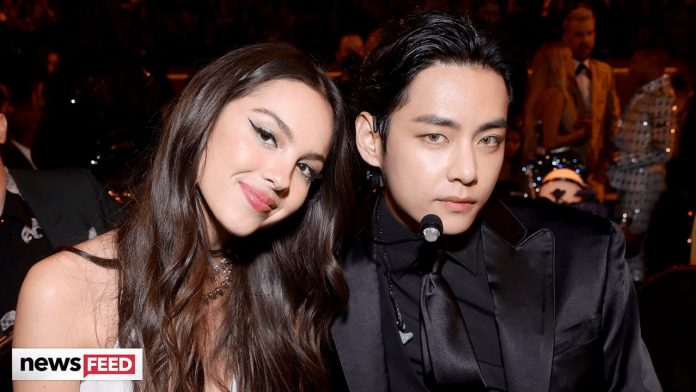 The scene where BTS V sits next to Olivia Rodrigo, a ‘monster rookie’ who is very popular in the United States, and whispers was selected as the best scene of the 64th Grammy Awards ceremony.

On the 4th, the BBC announced five scenes selected as ‘Best Moment of the Year at the Grammy Awards’. The BBC selected the performance in which V whispered to Rodrigo as the best moment.

BBC said, “Their stage was as smooth as cream on that day.  After Rodrigo performed her hit song ‘Driver’s License’, the camera caught V leaning to whisper sweet words into her ear.” Then the media said, “Don’t tell Rodrigo. That evening, V was caught kissing the world-famous pop star Lady Gaga on the cheek.”

In addition, the BBC reported ‘a small accident in which Dua Lipa and Meghan the Stallion wore the same dress’ and ‘The film director and musician Questlove joked about ‘Will Smith’ to the duo Silksonic (Bruno Mars and Anderson Paak), ‘The scene where singer Dojacat almost missed her award moment while going to the bathroom’ as the best moments.