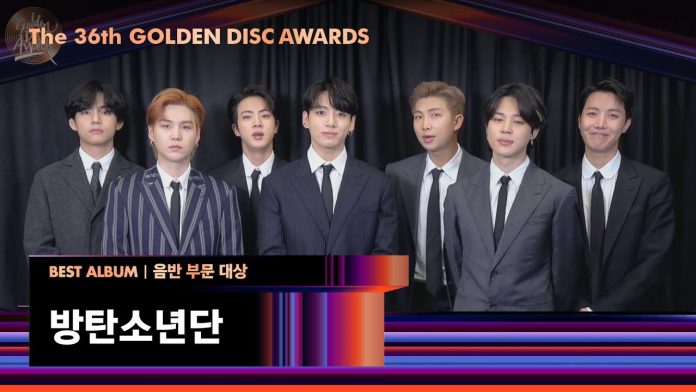 BTS, which recorded the highest sales of 3,724,898 copies of a single album with ‘BE’ released last year, set another record by winning the Golden Disc Awards for 5 consecutive years from the 32nd to the 36th.

‘Queen of Music’ IU won the grand prize in the digital music category for the third time after the 32nd and 35th.

Aespa prepared all the hit songs from their debut songs ‘Black Mamba’, to ‘Next Level’ and ‘Savage’.

The Brave Girls, an icon of reverse running (regaining popularity) and the cause of the stingray dance syndrome, won the Best Group award with their first Golden Disc visit.

The Boyz and Jeon Somi, who can not take their eyes off the stage, won the Best Performance Award.

ARTIST OF THE YEAR, which was first established this year, was takend by Aespa, and the Cosmopolitan Artist Award was won by Seventeen and Aespa.

The winners of the 36th Golden Disc Awards are based on the evaluation (40%) of a 50-member expert jury consisting of Golden Disc executive members, music reporters, music program producers, popular music critics, and officials from domestic distribution companies, and the Gaon Chart sales count (60%).

Vaccinations were checked in advance at the ‘clean concert hall’ that complied with social distancing guidelines and quarantine rules, and everyone tested their own kits at the site.

At the site, disinfection was carried out every hour with disinfectant, as well as wearing a mask in the event hall and hand sanitizer placed in a conspicuous place.

The entrance to the event hall was minimized and the ticket distribution site was unified.

People and vehicles that were not registered in advance were controlled, the same quarantine rules were applied to the artists, so they checked their identities with their real names, and checked the temperature of those who entered with a non-contact thermometer.