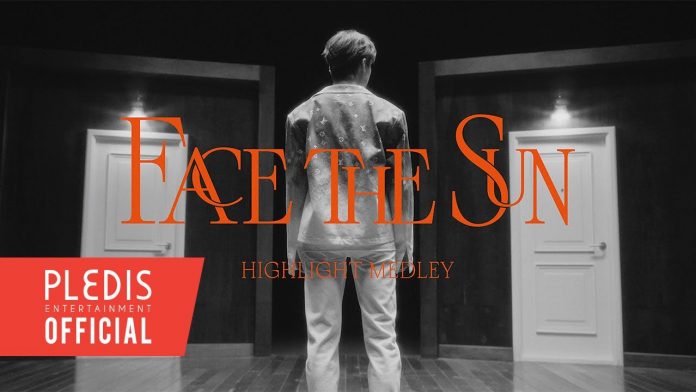 On the 23rd, SEVENTEEN released the highlight medley video of their 4th regular album ‘Face the Sun’, which will be released on the 27th at 1 PM on the official social media, and heated up the comeback fever that is approaching on the 4th.

The highlight medley video contains a total of 9 highlight songs from the 4th regular album ‘Face the Sun’, starting with Vernon standing in front of two crossroads, and the members appear one after another, making it fun to listen to and to watch.

‘Darl+ing’ is a pop genre song with a minimal and addictive chorus and a unique vocal synth sound, and it contains a warm gaze towards everyone who is with SEVENTEEN.

‘HOT’ is a song that combines the hip-hop genre with the western guitar sound, showing SEVENTEEN’s unique heavy and passionate identity, and ultimately revealing a strong will to become ‘The Sun’.

The sixth track ‘Shadow’ is a song that combines rock and pop genres and features appealing vocals, drums, and bass sounds.

The 4th full-length album ‘Face the Sun’ is an album that honestly depicts Seventeen’s ambitions to become a being like the ‘Sun’, the only and most influential people in the world.

‘Face the Sun’ received so much attention that it surpassed 2 million domestic and overseas pre-orders, and predicted Seventeen’s ‘Career High’.