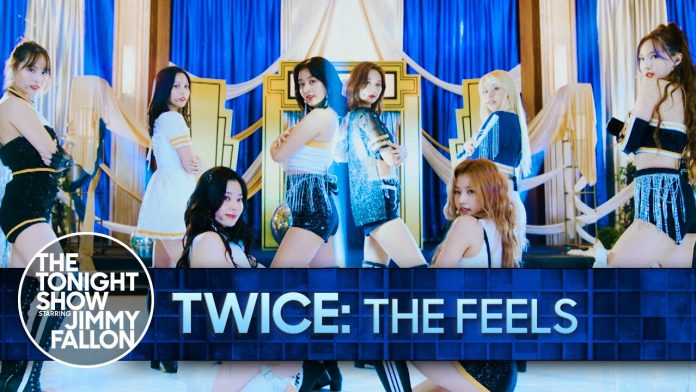 Group TWICE captured global attention when they first unveiled the stage of their first English single ‘The Feels’ on a famous American broadcaster.

On the afternoon of the 2nd, they appeared on NBC’s US program ‘The Tonight Show Starring Jimmy Fallon’ to unveil the performance of ‘The Feels’ for the first time and provided special pleasure to fans around the world.

Many foreign media paid attention to their release of their first English single, and US Billboard published an article on the 1st (local time) and said, “TWICE is back with an English song this time. In the first English single ‘The Feels’ released after their debut, the fans were greeted with a visual that was full of joy.”

Also on the same day, British music media NME said, “TWICE brought disco pleasure through the shining global single ‘The Feels'” and added, “TWICE is ready to attract more music fans into their own domain.”

To commemorate the release of ‘The Feels’, TWICE is presenting various contents such as official lyric video, MV reaction, choreography video, and dance challenge, and presenting entertainment to fans.

The 10th mini album ‘Taste of Love’ released on June 11 of this year entered the US Billboard’s main chart ‘Billboard 200’ at 6th place, recording the highest record in the history of mini albums released by K-pop girl groups. Expectations are high for TWICE’s new performance, which has proven its worldwide popularity.