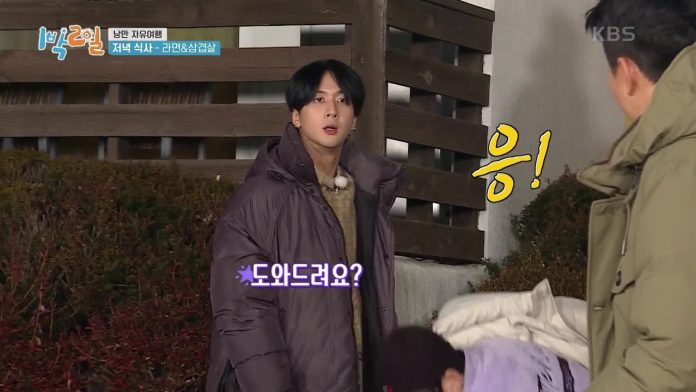 ‘Two Days and One Night’

On this day, Ravi and the members enjoyed a rich lunch unlike usual, attracting attention. Ravi, Moon Se-yoon’s ‘food apprentice’, seemed to have been stimulated by seeing Moon Se-yoon eating, and showed the ‘mukbang’, a savory chicken ribs wrap, which properly stimulated the mouths of the viewers.

After a hearty dinner, Ravi and the members, who were enjoying their leisure time by eating dessert, eventually faced the risk of wasting their pocket money and used the so-called ‘Greeting Money’ loan system.

The members who took on the challenge to enter the square space provoked laughter by playing the game to death to avoid getting in.

After arriving at the base camp, Ravi and the members tasted the ramen cooked by Kim Jong-min and were amazed.

Ravi continued to dance, reminiscent of a musical, and turned the scene into chaos.

Kim Jong-min, who had been watching Ravi’s trance dance, eventually got excited and performed a synchronized dance move with Ravi, heating up the atmosphere.