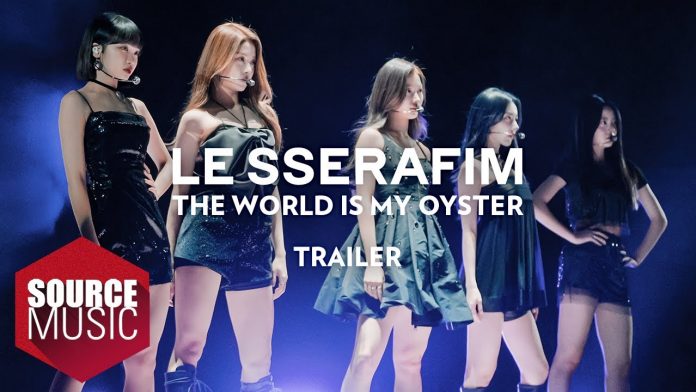 LE SSERAFIM is releasing a debut documentary with a 100% pure and sincere story.

Le Sserafim (Kim Chaewon, Huh Yunjin, Sakura, Kazuha, Hong Eunchae) released the trailer for the documentary ‘LE SSERAFIM – The World Is My Oyster’ on the YouTube channel of HYBE Labels at 8 pm on the 15th.

The documentary’s subtitle ‘The World Is My Oyster’ is the title of the intro song included in Le Sserafim’s debut album ‘FEARLESS’, which means ‘I will not give in to the world and eventually make it my own’.

‘LE SSERAFIM – The World Is My Oyster’ contains the realistic debut process of Le Sserafim that has never been seen before.

In the following member interview, Sakura confided her worries about her third debut, and Kim Chae-won honestly revealed her aspiration for success.

The joy of being united as a team by members with diverse backgrounds was short-lived, but they had to go through rigorous practice for their debut, and faced many frustrations and tears in the process.

Le Sserafim’s documentary ‘LE SSEAFIM-The World Is My Oyster’, which consists of a total of 4 episodes, will be released on the HYBE Labels YouTube channel at 8 pm on the 17th.