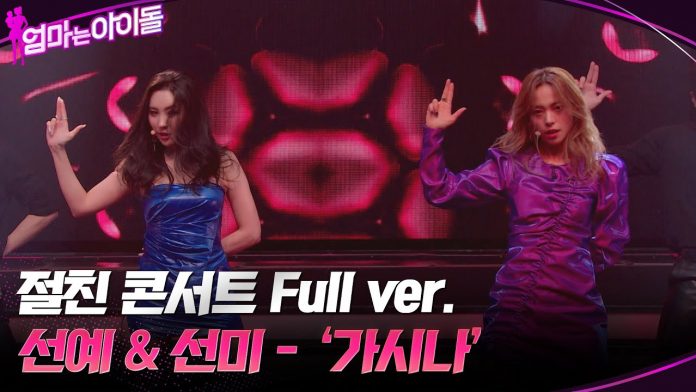 The debut of 6 members, Kahi, Park Jung-ah, Sunye, Byul, Hyun Juni, and Yang Eun Ji, of ‘Mama The Idol’ has been confirmed.

In tvN’s ‘Mama The Idol’ broadcast on the 20th, it was revealed whether the debut of the 6-member group Kahi, Park Jung-ah, Sunye, Byul, Hyun Juni, and Yang Eun Ji was confirmed.

Byul and Na Yoon-kwon decorated the stage with the duet song ‘Hello’.

In particular, the dancers who were with us at the time of Jewelry also joined, adding to the meaning. After a long time together, they performed a stage of the famous songs people loved at that time, such as ‘One More Time’.

On this day, Sunye performed Sunmi’s ‘Gashina’ stage. Sunye, who visited Sunmi’s practice room before the stage, was immersed in emotion that she met at the practice room after 10 years.

Sunye said, “I auditioned when I was young, and we marketed it when we debuted.” She said, “The PD said it was too burdensome to be honest with me, and he was always sorry for the other members as well.” Sunmi said, “Because we had you, we were able to form a debut group under the name of ‘Wonder Girls’.”

Then, recalling the past when the 18-year-old leader Sunye always took care of the younger sisters’ meals, she said, “She(Sunye) was like a mother. When we were on a world tour alone, she came to Canada with a bunch of kimchi fried rice.”

Sunye said, “There was a difficult time, but you rearranged yourself and came out as a solo and grew so well, so thank you very much always.” Sunmi said, “She was always a charismatic person on stage, and her eyes were still alive.”

In particular, Sunye introduced a special second best friend. Sunye, who said, “I’m calling my 20-year-old friend for today,” stood on stage together with Park Jin-young after 4045 days. Sunye said, “He’s always been there at important moments in my life.”  Park Jin-young said, “Sunye has a strong sense of responsibility. I think Sunye can once again give courage to many mothers who are watching this, or the many people who have given up on life.”