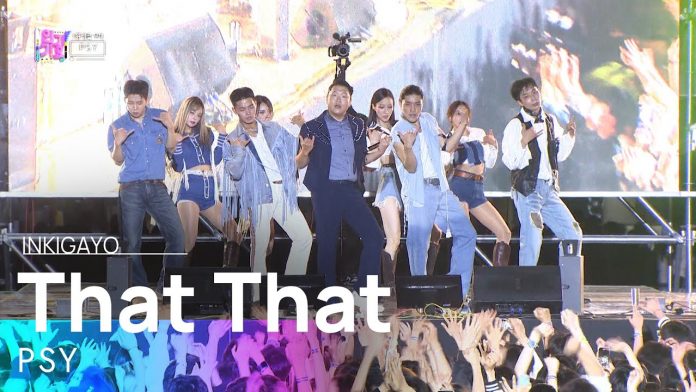 In the SBS music program ‘Inkigayo’, which was broadcast on the 22nd, PSY ranked first with the title song ‘That That (prod. & feat. SUGA of BTS) of his 9th full album.

As a result, ‘That That’ won 6 trophies from music shows such as the cable channel MBC M’s ‘Show! Champion’ 1st place for 2 weeks in a row, cable channel Mnet’s ‘M Countdown’, MBC ‘Show! Music Core’.

Immediately after its release, ‘That That’ opened its doors by taking the top spot on iTunes’ Top Song Charts in 73 countries, and succeeded in entering the UK’s Official Singles Chart TOP 100 at No. 61 and the US Billboard’s Main Single Chart at No. 80 HOT 100.

Thanks to this, Psy additionally released the music videos for ‘Celeb’ and ‘Happier (feat Crush)’, and performance videos for ‘Now (feat Hwasa)’ and ‘GANJI (feat Jessie)’ in ‘PSY 9th’ and continues his active communications with fans with his music.