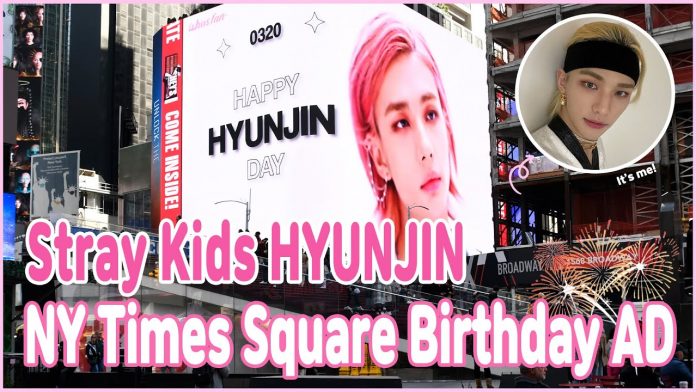 Hyunjin, a member of the group Stray Kids, appeared on a large billboard in Times Square in New York to celebrate his birthday.

According to the global K-pop fandom platform ‘Whosfan’ on the 16th, Hyunjin was selected first in the voting for the 3rd week of March in ‘Who is the idol to celebrate birthday in Times Square?’ With the support of Whosfan, a happy birthday advertisement was sent out on a large billboard in Times Square, New York. Hyunjin, who was born on the 20th, took first place with 55.38% of the votes in the Times Square advertisement voting that was held for a week from February 21st to February 28th.

The advertisement will be screened for a week from March 14 to March 20, the week of Hyunjin’s birthday, based on local time, on a large, 47-meter-long billboard in the building right next to ‘tkts’, known as the heart of Times Square in New York.

Whosfan is holding global fans’ voting every week for K-pop artists who are celebrating their birthday over a large billboard advertisement account in Times Square in New York.

Currently, on the Whosfan app, various events that the global fandom can enjoy together are unfolding.