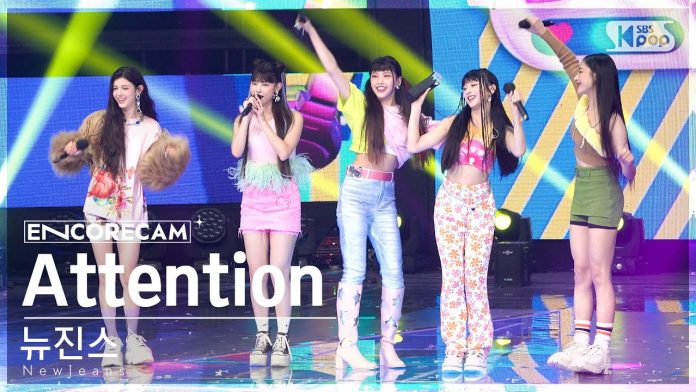 On SBS ‘Inkigayo’ broadcast on the 21st, Girls’ Generation’s ‘FOREVER1’, ITZY’s ‘SNEAKERS’, and NewJeans’ ‘Attention’ climbed as candidates for 1st place in the third week of August, while NewJeans ranked first.

NewJeans said, “Thank you, CEO Min Hee-jin, and other members of ADOR.”

LUCY presented the title song ‘Play’, which they made while recalling their childhood, when they could enjoy anything like play.

Returning to the first full album containing the conclusion of the ‘Luminous Series’, Luminous performed the title song ‘Engine’, a stage full of energy to escape an ordinary and boring day. ‘Engine’ contains the message that if I love myself, the world can become a space like a wonderland where I can do anything as free as in a dream.

Park Boram decorated the comeback stage with the new song ‘When I Look at You’. ‘When I look at you quietly’ is a medium-tempo genre guitar riff as the main song on a refreshing track with the lyrics of ‘Thank you and a happy heart for the one you love’. Park Bo-ram conveyed a love confession that was refreshing like the wind that blows coolly with a bright yet deep emotion.

BAE173, who made a comeback with K-pop’s ‘Odyssey’, expressed their strong will to run to the top no matter what difficulties they face with the title song ‘DaSH’.

So-jeong Lee performed the song ‘The Song I Loved Most’, a song that expresses the person who comes to mind.

THE BOYZ decorated the stage with the title song ‘WHISPER’, saying “If you want to feel the coolness and mood at the same time, please don’t miss The Boyz’s festival.”

‘WHISPER’ is a song where you can feel The Boyz’s unique energetic mood.

Girls’ Generation announced their full comeback with the new song ‘FOREVER 1′, which will be released after 5 years in celebration of the 15th anniversary of their debut. Girls’ Generation presented an exciting atmosphere as if they were at a festival with their unique cool singing, and announced the return of the national girl group by presenting a colorful boat party.